In 2011 I had the opportunity to demonstrate Karate at the 5th Uchinanchu Festival at the Budokan in Okinawa, Japan.  That is a trip that will be further discussed at a later date, but for now I’d like to focus on my visit to the Karate Museum.  I have been studying Karate and Martial Arts in general since I was a small child.  Some of my earliest memories are of practicing punches and kicks in a Ninja uniform in my back yard.  Children become infatuated with things in a way that adults simply cannot.  I would read every Ninja, Karate, or Kung Fu magazine I possibly could; including my father’s collection of vintage (even then) Black Belt Magazines.  So, in addition to being obsessed with acting like a Ninja, running around punching and kicking, I would also spend a lot of time reading and studying about it as well.  So, I became a bit of a Martial Arts historian, and became even more interested in connecting with Karate’s past in my own training.

Tetsuhiro Hokama is also fascinated with Karate’s history and connecting us with its past.  I was fortunate enough to have the opportunity to visit Hokama Sensei’s Dojo/Museum and I thought I would take some time to attempt to draw attention to this amazing place.
I wasn’t quite sure what to expect, but this was not what I expected.  We were a fairly large group of around 12 people pouring out of Taxis, descending upon this modest must-see attraction.  The exterior and façade were completely unexpected.  Powder blue and yellow, with hand painted walls indicating that it was a Dojo. 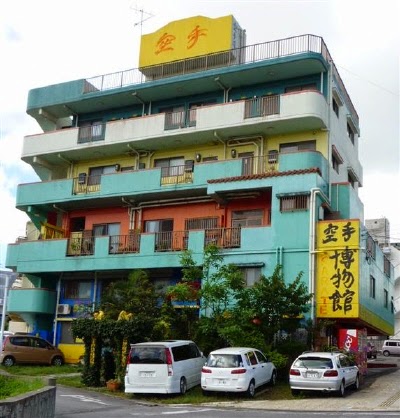 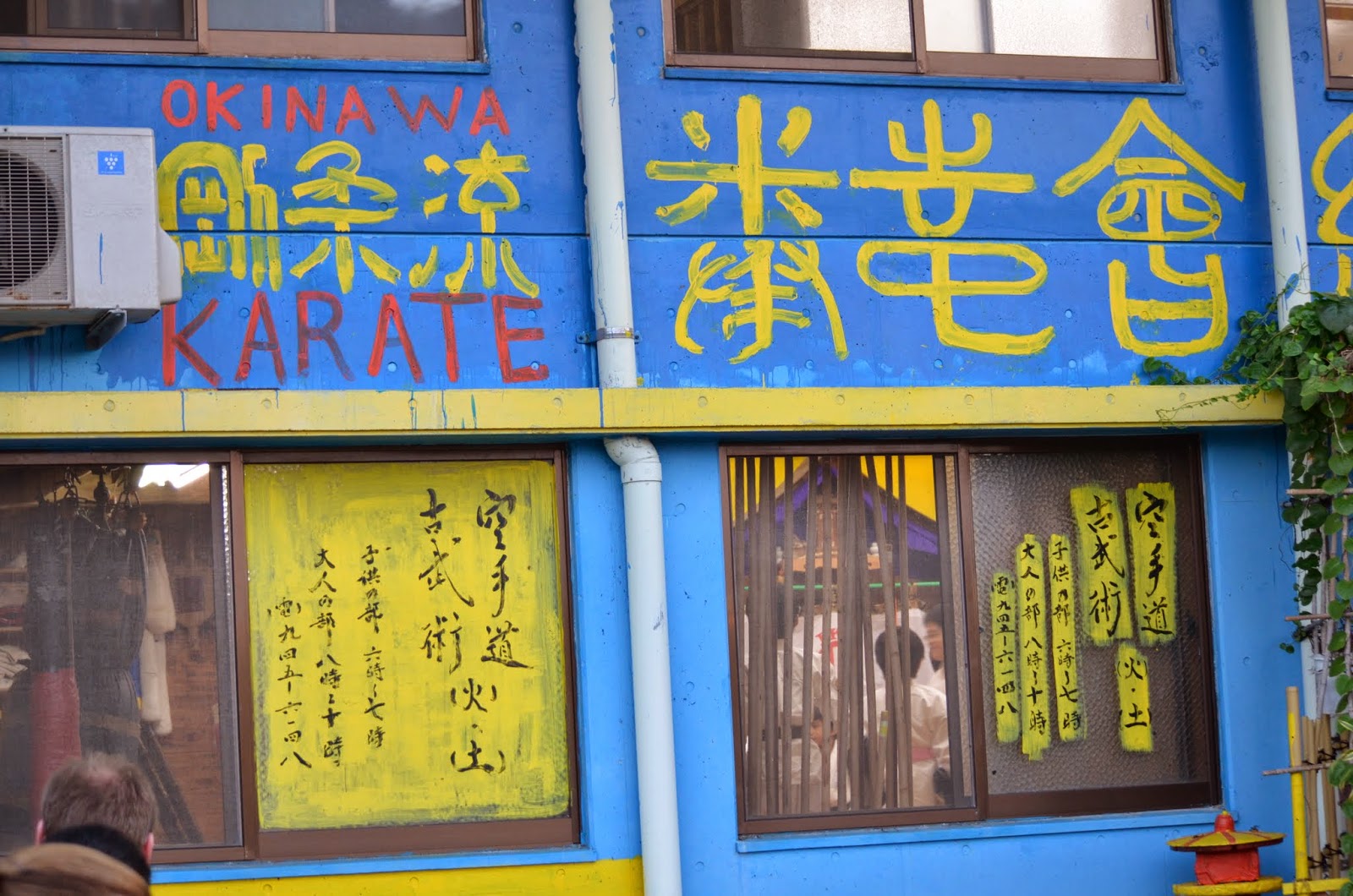 Upon entering you are, of course, greeted with piles of shoes.  Adding to the pile carefully, you immediately enter a Dojo and bow yourself onto the deck.  The night we visited the museum, there was a children’s class in session.  It was actually quite a spectacular display.  I had been hoping for an adult class, with the fantasy of the offer to join, but the children’s class was actually more interesting in some ways.  One point of interest is that they all wore Shureido

gi and belts, some pink belts (I don’t see those on Shureido’s web page!).  Here in America, Shureido is a luxury gi, a brand comparable to Rolex.  In Okinawa it’s what the kids wear too.  That aside, the children were practicing some real Karate.  It wasn’t a line of punching and kicking, or games with foam flags that make sound when you hit them, or a pizza party.  It was young people learning real Karate, some of them even working on Nunchaku.  I was able to see some of the class from above the Dojo (the museum is arranged like a ring around the perimeter of the Dojo on the 2nd floor).


At the end of our visit, Hokama Sensei asked one of my friends if his son would come meet the Karate class.  He agreed, and the young students exchanged some Japanese and English with him, and they shook each other’s hands and bowed to one another.  Hokama makes a point of teaching his young students how to say a few phrases in multiple languages, reasoning that Karate is international, and Okinawa is its home.  They were excited to hear an American say the days of the week, numbers, or the seasons; and eager to try their English on American ears.  In exchange of course, he recited the numbers in Japanese, and learned a couple of phrases as well.

The Museum itself is very small, not what you will be expecting most likely, but it is absolutely filled with some of the most significant and important artifacts of our Karate and Kobudo history.  There are many old books on Karate, as well as old training tools such as buckets of stone, or crude weights.  There are many photos and interesting facts about the greatest masters of the past.  Perhaps the most interesting are the ancient weapons on display.   There are clear forerunners to our Kobudo weapons that date back hundreds of years, and often to India (not so much to Okinawan farms).


As you can see, in true Okinawan fashion, it is a very modest Dojo housing one of the world’s foremost Karate historians/practitioners, and Okinawa’s only Karate Museum.  He is also very funny, and incredibly nice.  As you can imagine, a group of 12 Martial Artists would have a lot of questions, and he was very kind and patient with us, while still maintaining a watchful eye on his class downstairs, despite it being led by other instructors.  I asked Hokama Sensei why someone might punch a certain way (depicted in a photo on the wall there) and he replied “why do you wear your hair like that, and he wears his like that?”  A truly Okinawan response to a truly American question, and very telling as to Okinawan attitudes about the things we discuss endlessly.

Okinawa is an incredible place with incredible people, and they are proud of their Karate heritage.  I hope one day soon Hokama can realize his dream of having a large purpose-built museum on Okinawa for Karate.  As he mentions, Okinawa is the Mecca of Karate.

Just for background, in case you aren't familiar with Hokama Sensei, here is some information posted on his website:

Tetsuhiro Hokama was born in Taiwan in 1944 to his parents, both of Okinawan decent. He began training informally under his grandfather, Seiken Tokuyama, in 1952. In 1961 his formal training began at the Naha Commercial High School Karatedo club, which was under the supervision of Mr. Chiyokutani Irashi (Gojuryu), under Seiko Higa. That same year he began training with the legendary Seiko Higa (1898 -1966) a student of Kanryo Higaonna (1853- 1915) and Chojun Miyagi (1888-1953). It was at Higa’s Dojo where he met Shinpo Matayoshi  (1922-1997 Kobudo teacher) and began learning Kobudo, Hakutsuru ken (White Crane fist)  and Kingai Ryu (a martial art that his father, Shinko Matayoshi 1888- 1945 learned in  Manchuria).


Upon the death of Seiko Higa in 1966 Hanshi Hokama continues his training with one of Higa’s top student Seiko Fukuchi (1919-1975) who was Seiko Higa’s assistant instructor. He also trained in Okinawan Kobudo under Shinpo Matayoshi.

In 1974, he became the director of the Okinawan High School Karatedo Association, after establishing several Karatedo clubs, and was awarded the title of Shihan in 1977. He was a technical advisor for the All-Japan Karatedo Ken Yu Kai, and secretary for the All Okinawa Karatedo Association.
Of Hokama Tesuhiro's prominent accomplishments is his book History of Okinawa Karate, published in 1984, followed by Hokama Sensei opening the first ever Karatedo Museum in January of 1987, called the Okinawa Prefecture Karatedo wa Kobudo Museum in Nishihara Okinawa and built a monument in Okinawa to noting it as the birthplace of Karatedo. He currently heads the Okinawan Ken Shi Kai organization.

Tetsuhiro Hokama is a 10th Dan Gojuryu Karatedo Hanshi, President of the Okinawa Gojuryu Kenshi Kai Karatedo Kobudo Association and founder of the first Karatedo museum in the World. Although not as well known in the United States compared to other Okinawan Gojuryu teachers, Hanshi Hokama is one of the most knowledgeable Gojuryu Karatedo masters. He has a deep understanding of the “Old Ways” of Karate.

Videos, and some photos were taken from Hokama's website: http://www.tetsuhirohokama.net/Home_Page.html
Other photos taken by the author, 2011.
Posted by Unknown at 1:30 AM